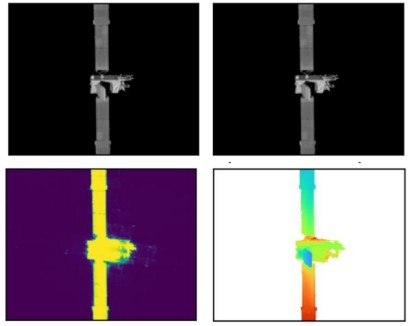 This paper describes a system for generating digital 3D models of spacecraft from 2D imagery collected on-orbit. The 3D model represents the surface location as well as regions of uncertain geometry due to insufficient information and thus can be used to inform optimal future collection paths. The reconstruction method is demonstrated on real on-orbit imagery of the Intelsat 10-02 commercial communications satellite collected by Northrup Grumman’s MEV-2 space vehicle and released publicly via YouTube. Despite low image quality and the lack of available sensor metadata, we demonstrate the feasibility of recovering a 3D representation of the target spacecraft.